We live in a connected world. Social, business, computer networks are around us. This knowledge brings us to the next natural step — analysis. Do A and B have mutual friends? Does outage of the device X affect the device Y also? Are Company 1 and Company 2 somehow connected? 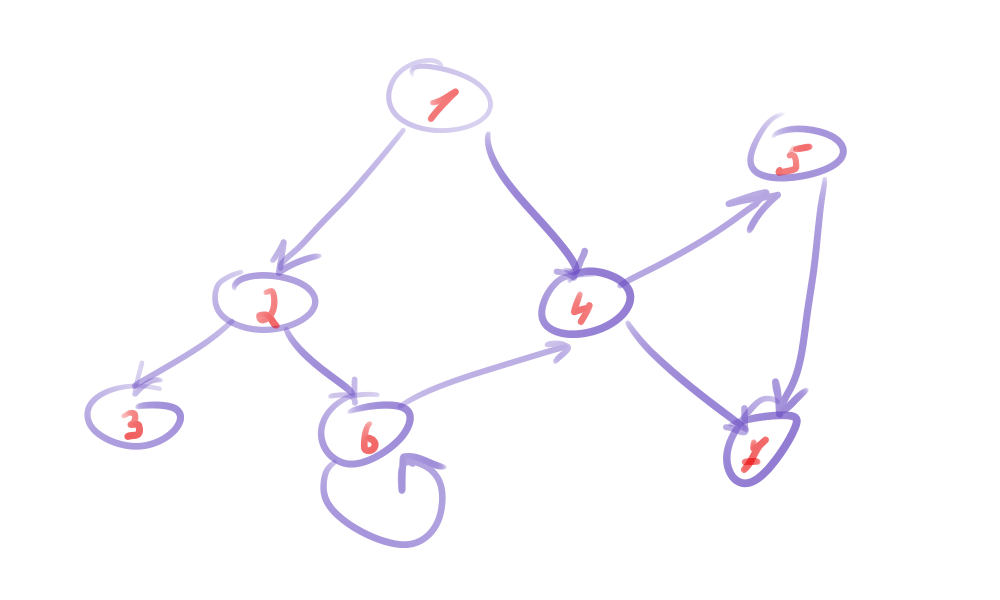 At AgileVision.io we often need to implement such kind of analysis for our customers. At some point, even the most efficient algorithm reaches the limits of the underlying execution environment. But folks from AWS made sure it will be somewhat difficult to meet those limits.

As a participant of the AWS Neptune Preview program, we had a chance of evaluating the new service. This is an introductory blog post about the AWS Neptune.

This blog post was written when the AWS Neptune was in preview. The current user experience/user interface of the AWS Console can be different.

Once the preview access request is approved, it's possible to access the AWS Neptune console and create an instance there.

First, go to the "Clusters" section of the AWS Neptune Console and click the "Launch DB Instance" button on the top right:

On the basic settings page there are only three items that can be modified:

We'll go with a smaller instance packed with 122 GiB RAM with Multi-AZ deployment disabled. Once DB details are in place, click the Next button: 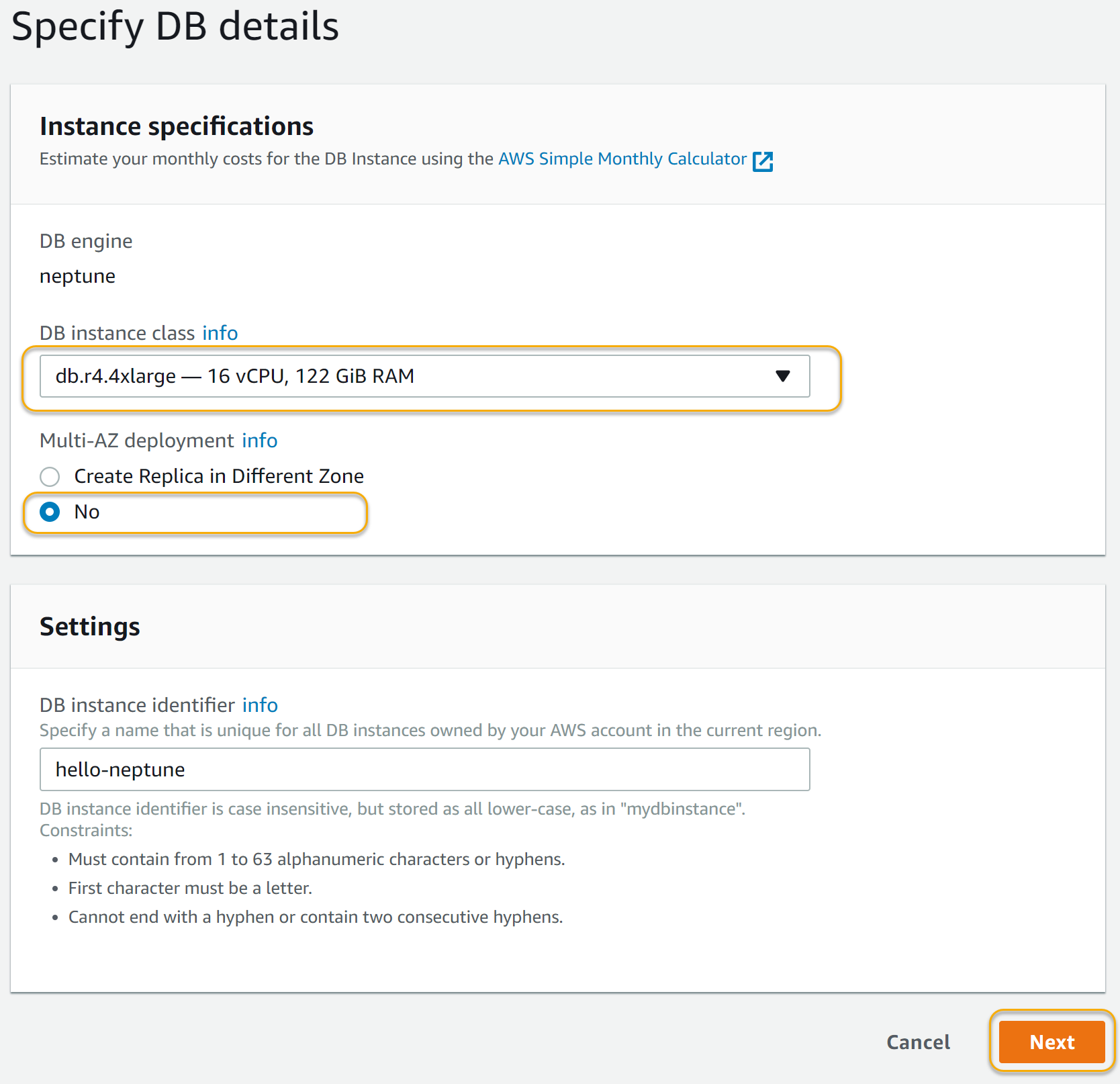 The next step is to configure advanced settings of the DB instance. It is very similar to the AWS RDS setup flow, so if you have already worked with it, there should not be any difficulties.

A VPC is required for the AWS Neptune Instance. It's possible both to select an existing VPC or create new. We'll be using a default VPC for the demo purposes. 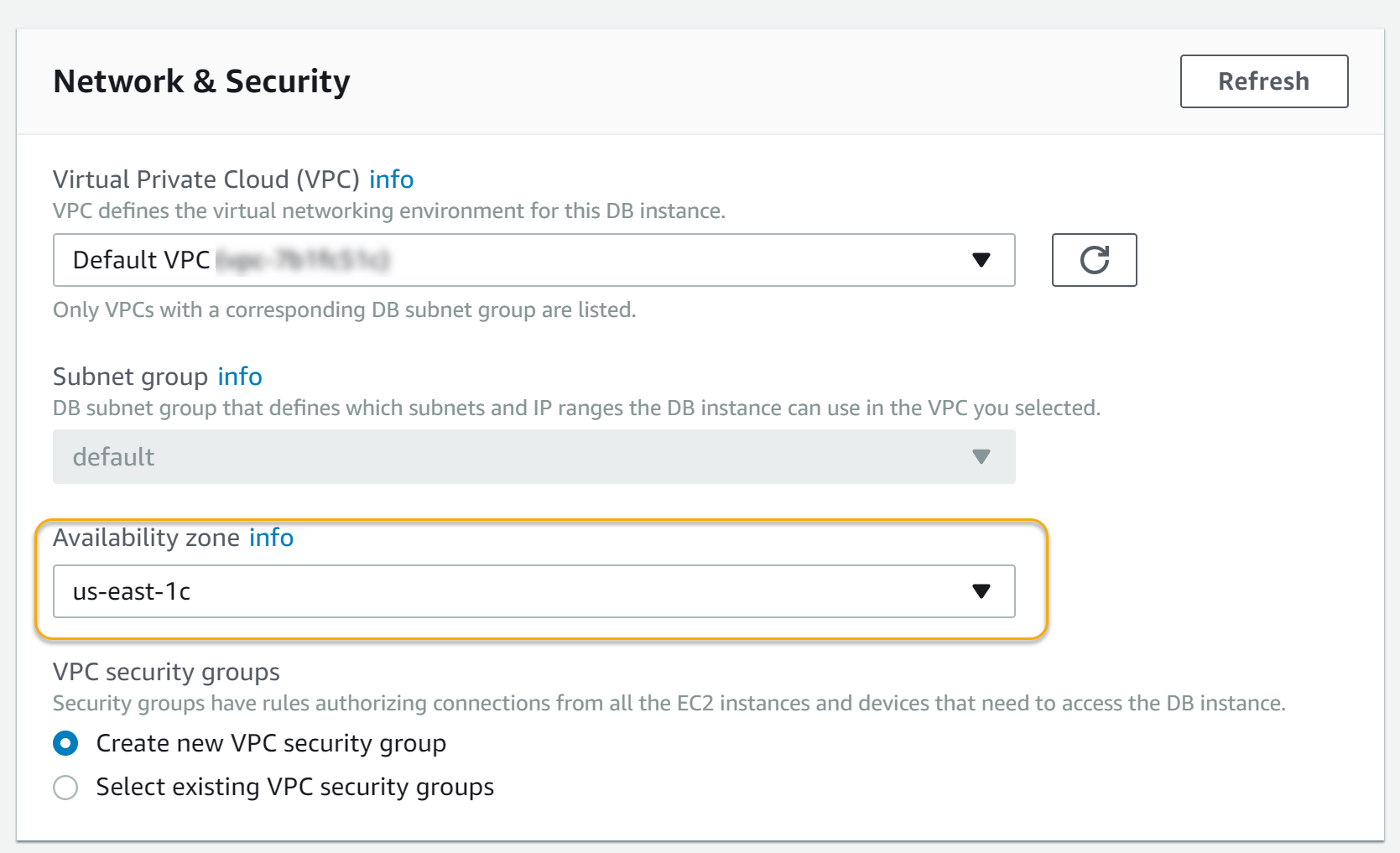 Other advanced settings include:

We'll be using default values for all settings above since they are suitable for our needs. After all advanced settings have values we need, it's possible to launch the AWS Neptune Cluster. It will be started immediately, but then some time will be required to provision the DB instance itself.

Until then, it will have the "Creating" status:

Usually, the provisioning takes 3-5 minutes. Once it's finished, a DB instance will have the "Available" status. Please, note where is DB endpoint instance is located. We'll need it to access the DB instance:

While we don't have any data in the AWS Neptune yet, we'll learn how to access it using the RDF4J Console. This way we'll be able to insert several nodes to the graph DB and later check whether our import process is doing what we want.

To access the database, we'll need to create an EC2 instance in the same VPC and the same availability zone as the AWS Neptune DB instance. We'll be using t2.micro instance with Amazon Linux AMI:

After the instance is created, we need to correctly configure the security group of the AWS Neptune instance, so our EC2 can reach it.

To check the connectivity between the EC2 and the AWS Neptune instance, the following query can be executed using curl command-line tool:

Because we are querying an empty DB, the result is very predictable:

All subsequent requests using Gremlin won't work for the AWS Neptune in the SPARQL mode and vice versa, including data import.

For example, if the AWS Neptune is in Gremlin mode, import of RDFXML will fail with the following message:

So now we can access the instance and perform HTTP requests via curl to execute Gremlin queries. But low-level syntax of curl is not something we want. Let's use RDF4J Console instead.

On the EC2 instance, execute the following bash script:

The next step is to configure a SPARQL repository for the AWS Neptune instance:

To use the newly created repository, type "open neptune" in the RDF4J console prompt. Then try executing the following command:

The result didn't change a lot, just got more readable:

Still it's very exciting, since now we can start exploring the brave new world of graph databases. You'll need to exit the RDF4J console to start importing the data into the AWS Neptune instance.

It's time to import some data to our instance. We could create it manually, but it's suitable only for small graphs, while a 16 CPU / 122 GiB RAM instance definitely deserves some interesting dataset. We'll be using Geospecies RDF dataset from http://rdf.geospecies.org.

Time to start importing the data itself. We have it in RDF XML format which can be easily consumed by the AWS Neptune Loader. To start the import process, use the following snippet:

The interesting part is that Neptune supports compressed data. This is really convenient for big, text-based files where compression has real benefits.

The response should be as follows:

It means you haven't set up IAM roles correctly.

Once you have the loadId, it's possible to check the current status of the import job:

According to the response above, AWS Neptune imported 2 million records in 31 seconds.

And open the "neptune" repository we created earlier

Now the RDF4J console is ready to evaluate queries on the AWS Neptune instance.

Query all geospecies kingdoms and their common names

Amazon is rolling out their own service for graph databases, which means another set of self-hosted solutions can be moved into the cloud to benefit from the managed infrastructure, autoscaling and easy backups.

There are some limitations in the preview (like inability to change the instance mode after the first request), but the service looks great in general.

In this introductory post we haven't utilized the power of AWS Neptune a lot and executed very basic queries. Part 2 of the article will be even more exciting, since we'll describe how we managed to import the Bitcoin graph into the AWS Neptune.

We hope you enjoyed the reading! Questions and comments are highly appreciated.